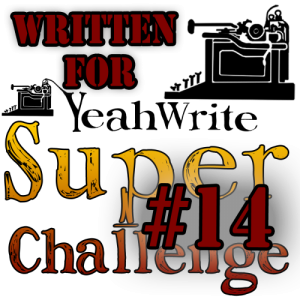 The following story was written for the first round of YeahWrite’s Super Challenge 14. I’m very pleased to say that it got me through to the second round, which takes place this coming weekend (Nov 16-17, 2019).

I hope you enjoy!

Synopsis: Rosemary searches for the key that will let her fulfill her destiny and claim ownership of her family’s spellbook.

I’ve been waiting my entire life for today. You might think that’s an exaggeration, but trust me, it’s not. This day is the literal reason I exist.

Confused? You won’t be, once I tell you that I’m part of the Deveroux family. And currently, it’s my generation’s turn to duel for the right to our family’s spellbook. I have a lot to make up for, as my mother narrowly missed out on winning it, outwitted by her younger sister, my aunt Lucille. Now her daughter, Marianne, is going to unwittingly help me win it back.

My cousin is … nice. Really nice. Sickenly nice, if I’m honest – though don’t think that I don’t love her. Just because she’s a rival doesn’t change the fact that she’s family. But that isn’t going to stop me from defeating her.

I know the book is somewhere in her house, under a cloaking spell. For the last year, I’ve been trying to determine the spell’s power source and, finally, I have it: the rock garden. I should have guessed it sooner. I know how proud Lucille is of it. Marianne loves it too, she always insists we play around it, even now that we’re too old for playing. Not that you’d know it from looking at her, she still has stuffed animals in her bedroom.

I sit down beside the garden and begin picking up stones. Some of them feel alive with magic, others are just plain rock. After a few moments, a shadow falls over me. I look up, and it’s Marianne.

“What are you doing?”

I shrug and summon up my most innocent smile. “I was wondering what these do.”

What did I say, she’s nice. “That would be great.”

She sits beside me and reaches for a nearby piece of snowflake obsidian, dark and light and lovely. “Most of them are channeling stones. This one is for cleaning spells.”

She hands it over to me, and the magic feels like pop rocks against my palm. As I hold it, I focus on a small stain on my jeans. It disappears before my eyes.

“Handy,” I say, putting it back down. I haven’t been that interested in rock magic before, but maybe it’s something I should look into, once I have the book. I pick up a piece of petrified wood. “What about this one?”

“That is a teleportation stone. Its twin is at Granny’s, so we can go there whenever we want.”

That particular destination would be less handy for me, since Granny lives next door to us, but still a good trick to learn. But it’s not what I’m after. I put it down and pick up a black stone I can’t identify, ready to ask about it.

Marianne beats me to the next question. “Have you heard from Jeremy lately?”

I shake my head, then frown. Jeremy is my slightly older cousin – born one week before me, and he never lets me forget it. He’s been a vocal thorn in my side, as serious as I am about getting the book. And yet, now that I think about it, there’s been no sign of him recently.

Marianne also frowns. “Well, maybe he’s been sick, or something.”

“Or something…” I clench my fist around the rock. It feels cold and heavy.

“That’s just a regular stone, by the way,” Marianne tells me, and when I glance up I see, just for a moment, an odd smile on her face that I can’t quite make sense of. But before I can dwell on that much, something else catches my eye.

I turn my head and see the gleam of azurite. The rock is as blue as its name and mottled with mystery. It’s beautiful. It has to be the stone I’m looking for.

I reach for it, and Marianne’s face shifts once again. This time, I recognize the emotion: fear.

I ignore her and grab it. The stone is warm to the touch and almost pulsing with power. I smile in triumph but it’s fleeting, as the stone warms even more, now uncomfortably hot.

I scream and try to drop it, but the stone is fused to my hand. I look at Marianne, and she is smiling again. I recognize the expression; I’ve seen it before, in my own reflection.

Before I can finish, everything is gone.

Poor Rosemary. She always thought she was so clever. And that I was just so. Damn. Nice.

I pick up the stone that now contains her soul and put it in my pocket. Then I go inside, immediately heading upstairs towards my bedroom.

In my room, I stand in front of the shelf that appears to be filled with stuffed animals and figurines. Only one of them is real – the glass unicorn – and I pick it up. I grasp it tightly enough that it draws a few drops of blood – Deveroux blood.

The shelf’s true contents are now visible: an old book and a stone. I place the newest part of my collection alongside them.

“There you go, cousin. Now you’re with the spellbook after all. And once I turn eighteen, and my claim is complete, I’ll let you out again.” I touch the other stone, a piece of hematite. “You too, Jeremy.”

I restore the cloaking spell and head down to eat. That’s two cousins down, only three more to go.