#BookishBloggersUnite is a weekly hashtag that a group of bookish friends participate in to talk about books. This week’s host is Sue – check out her blog to find links to other posts.

This week, we were inspired by a post @ Talking Tales and decided to do our own life in book tags post, finding books that fit eight different themes.

1. Find a book for each of your initials. 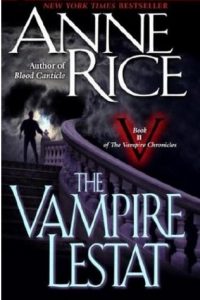 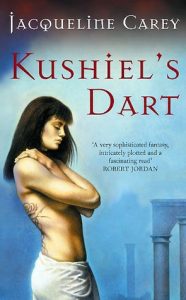 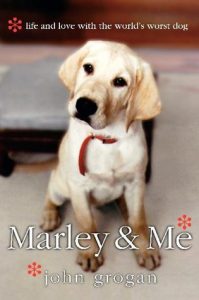 No, I couldn’t resist using Kushiel’s Dart for the K.

I went through a big vampire phase in high school – quite frankly, I never really outgrew it – and Anne Rice was the major author. I read all of the Vampire Chronicles and, while The Vampire Lestat wasn’t my favourite (that honour goes to Interview with the Vampire), I do have many fond memories of the Brat Prince’s origin story.

Kushiel’s Dart is the first book in my favourite series of all time, in case you haven’t been paying attention. I also read it for the first it time in high school and I’ve lost track of how many times I’ve re-read it since.

Marley and Me is a heartbreaking book but you sort of know that from the beginning, since it’s the story of the family told through the lifetime of the “discount puppy.” I am also very fond of the movie adaptation, which has a whole lot of heart and also made up a lot less of the dog hijinks than I initially suspected.

2. Count your age across your bookshelf 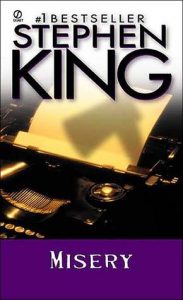 I am not a big Stephen King reader but the books of his that I have read have been quite good and none more so than Misery. This is clearly a very personal story to King and he uses all his mastery of the craft to great effect here.

Also of note is that in another of his books that I have read, On Writing, he mentions an alternate ending to Misery that I sort of wish he had gone with – though I’m sure Paul Sheldon much prefers the ending he got.

3. Pick a book set in your city/country. 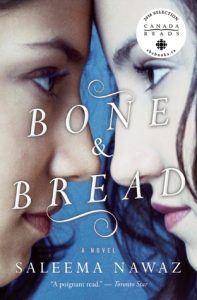 I first read Bone & Bread a few years ago, when it was one of the finalists for Canada Reads. I intended to read all 5 titles before the debates but only ended up getting through the one. However, I loved it and was very sad when it was eliminated on day 2 of the competition. While most of the book is set in Montreal, there is a significant portion that occurs in Ottawa and it was really neat to actually be able to picture the setting, particularly for someone who usually isn’t a very visual reader.

4. Pick a book that represents a destination you want to travel to 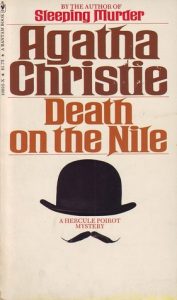 So, I haven’t read this one and choosing it may not be a great sign for what is coming. But I also read Before the Fall will on an airplane, so maybe it’s my thing.

I have been fascinated by Egypt for years, ever since I picked up a book about the curse of King Tut’s tomb up from the library. Since then, I’ve dreamed of going there myself. My ultimate vacation would be an actual cruise on the Nile.

Hopefully without any death. 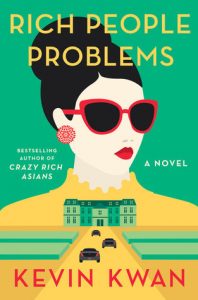 My favourite colour is green and this is a great green cover. I also love the yellow and just the whole visual design of this one (as well as the previous books in the series.

I just recently got into this series, after having book 1 on my TBR for ages. I really enjoyed Crazy Rich Asians, though I will admit that China Rich Girlfriend had some issues, mainly with the plot feeling meandering and disjointed, though the characters were great. That said, I already feel like Rich People Problems has more focus and can’t wait to see where it takes me.

Also super excited for the movie to come out this summer!

6. Which book do you have the fondest memories of? 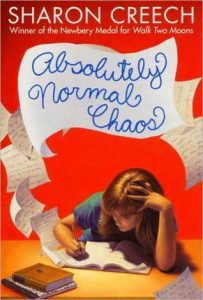 Funny thing about this book? I always think the title starts with “absolute” rather than “absolutely.”

This is another book where I don’t know how many times I have read it. I would guess that I first read it back in elementary school, maybe grade 5ish? And then again and again until my copy began looking pretty beat-up. I re-read it recently and loved it just as much as ever. It’s a great coming of age story and I just adore it.

Probably the biggest effect this book had on me was a bit unexpected: it ended up getting me into Greek mythology – I even read The Odyssey because of this book. Which led to a life-long obsession with ancient Greece that has also led me to great books like the Percy Jackson series.

Absolutely Normal Chaos is a companion to Creech’s more well-known book Walk Two Moons, which I also read … and didn’t like nearly as much (I enjoyed it but I had no desire to read it until the pages were falling out). For me, this will always be Creech at her best.

7. Which book did you have the most difficulty reading? 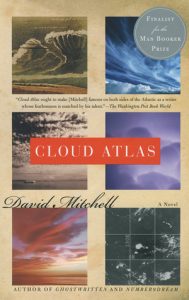 Cloud Atlas is a brilliant book but it’s definitely not a light read. The innermost story especially can be a challenge because it takes awhile to get a feel for the language. But the challenge is definitely worth it in the end and I’m very glad to have this one on my shelf.

Also, the movie, while deeply flawed, was also very interesting.

8. Which book on your TBR will give you the biggest accomplishment when you read it? 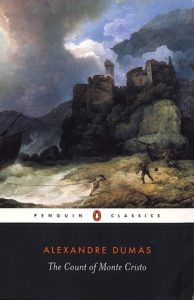 I have started and stopped reading this one several times now. I already know the basic story and I think it is fascinating but I find the actual book can be a bit of a slog at times. I’m sure it gets better later, when the plot really ramps up, but so far I haven’t quite gotten there. But one day, I will!