Once again, I’m still alive! Life has been keeping me pretty busy but not too busy to read a lot of books (38 titles so far!). Seeing as 2019 is halfway through, it seemed like a good time to talk about the best book I’ve read this year, along with some honourable mentions. 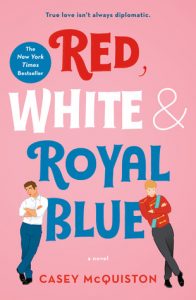 I’ve read a lot of good books this year, but none have given me as much enjoyment as Red, White & Royal Blue. I pre-ordered this book based on the premise alone: the son of the (female!) president of the United States falls in love with the son of the Prince of Wales. And not only did the book live up to expectations, but it exceeded them.

I absolutely loved pretty much every character in this book, especially Alex and Henry. Their love story was 100% compelling and the two of them contrasted and complimented each other perfectly. The supporting cast was equally delightful and I would love for any of them to get their own book in the future.

I also just wanted to live in the world of this book, where a woman was elected president in 2016 and everything just seems so much better than the current state of affairs in every foreseeable way. Hopefully, reality will eventually be closer to this than it is today.

Finally, I loved that this book avoided the main downfall of so many romances that I read, in which the final challenge for the couple ends up being something that could easily be sorted out if the two (or more, if this is a poly book) of them would just sit down and talk to each other.

All and all, I couldn’t ask for much more in a book. I have now bought it twice, since I initially got it through Kobo, then decided I wanted a physical copy so that I could re-read my favourite parts over and over again. And that’s why it actually wasn’t too hard to pick this as my favourite.

While it was easy to pick my favourite, I adored all these titles as well:

My Sister, the Serial Killer by Oyinkan Braithwaite

The writing in this book is absolutely beautiful. Also, I found it to be a really great exploration of the bonds of sisterhood and just what lengths you’ll go for your family.

I have basically been waiting 20 years for this book, ever since Padmé Amidala first appeared on screen. This is the book she, and her handmaidens, have deserved for so long and I’m so glad it finally exists in the world.

Before Mars by Emma Newman

This book had me feeling all the feels. I loved the mystery and how I could put some of the pieces together but not all of them. I also really enjoyed the characters and the world. But most of all, it’s the ending that is going to stick with me. I don’t usually cry when reading a book, but this one had me weeping by the final page.

Other than Red, White & Royal Blue, this is the title I have been re-reading the most since initially checking it out. I actually owned this book for a long time before reading it and I’m kicking myself over that now because I love it so much. This is another romance where just everything worked so well for me, particularly the tension between the main characters as they decide if they can get past the many reasons they shouldn’t be together (spoilers: they do).